My mother became very ill with a viral illness, I highly suspect H1N1 influenza or something similar. I knew some 30,000 to 80,000 people annually die from flu, but I had never seen my mother so sick. Running high fever, going in and out of consciousness, all while refusing to go to hospital against my advice. She had it all; generalized malaise, body ache, chills, hots, uncontrollable cough, poor appetite, and weakness. When her symptoms got better, her legs muscles had atrophied so much that she lost the ability to walk. She couldn’t even stand for more than 30 seconds. Much of December, I was her full time caregiver. I thought I would be able to do some “work” in between the care but there really wasn’t any moment to be away from her. Since she couldn’t walk much, I had to fetch water, pills, food, tissues, and everything else around the clock. She also had to be watched while eating to make sure she’s not aspirating food into lungs.

Fortunately, she made a remarkable turn around a few days before Christmas. Now she’s able to walk and getting stronger daily. I was able to take some days off to ski as well. I am just thankful to have had a Christmas and a new year with my mother.

While caring for my mother, I had to consider many things. First I really need to have a plan for her as she ages and, of course I pray for her good health and long life, but in the event she loses her independence, what would I do? If you had asked me a week before Christmas, I was just about to look for a care facility or at least a home assistant service. Second, I became acutely aware of fleeting time I have with her. Combined with the guilt of not spending enough time with her, I became more mindful of every minute I have with her. Spending more time with my mother made it to my 2019 goal list. And lastly, I also felt guilty for depriving her of the joy of grandparenthood. Me being an only child, I’ve made a terrible mistake and I would like to apologize to her but we are Koreans and a heart to heart talk is not something we do easily (despite of what you might have seen on Korean dramas). Perhaps this should also make the 2019 resolution list.

On the healthcare side, there are things that my mother did to get herself sick; overworking, doing things against the doctor’s advice (my advice) to name a few. However, she will now not hesitate to tell you that she’s alive because of the treatments I gave her. She’s gotten several stem infusions along with intravenous vitamin infusions along with immune boosting cytokine shots. Each treatment made her stronger and healthier and, I’ve always taken pride in my work but after it saved my own mother this time, I have a new sense of appreciation for my knowledge and, a renewed sense of responsibility to bring this type of treatment to more people in need.

Here is my mother and I when we took a trip to California. 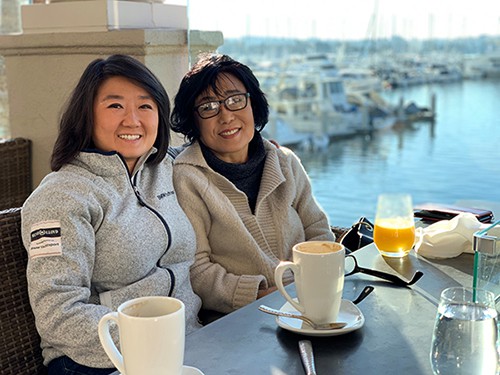 Until next time,
Dr. An.